My name is Malhett, and I’m the last of the original son’s of Prospero. The day when Prospero had fallen was the day my legion died by the wolves of Fenris. They mercilessly slaughtered my brothers with their incessant pride like a pack of hungry wolves, ready to tear our throats with savage satisfaction. Me and my brothers couldn’t hold the ‘Space Wolves’ at bay, so we we fled to the safest way we could. Our options were limited, we would never be able to reach our primarch in time as back up, nor would we be alive if we stayed on our dying world.

Our only option was to flee on our arcane craft away from Prospero. At first we left our planets orbit with ease, but then the wolves followed us with their weapons armed and loaded. Our craft was hit as we we’re about to jump into warp space, making our ships course go off its projected path way by the navigators. Thankfully we were able to exit the warp, and came out into the solar system to holy Terra itself. We might just be able to warn the Emporer of Horus’s betrayal and our Primarchs innocence in time.

My memory after warp transition was hazy, I can only remember being knocked out after our ship was surrounded. The onboard incomes were humans of Terra, but bear iconography that I’ve never seen before. My last memory of the event before I became unconscious was seeing that symbol, an single ‘I’ in red with a skull in the middel of the icon.

My brothers and I were interrogated for what felt like an eternity from our captors interrogation attempts. All of my brothers onboard the ship had died from interrogation, except for me, the last son of Prospero.

8,000 years later, I was proven to be loyal to the Imperium and the Emporer. However, the sins of my legion are hung upon my shoulders and must pay the price for its heresy. I was assigned to join an inquisition warband named ‘the Silence of the Shroud’, lead by Inquisitor Heralock. My role is simply to fight until I fall on my last breath, to atone for my legions heresy.

However, if I do not die in battle, a worse fate will befall me by the ‘change’……. 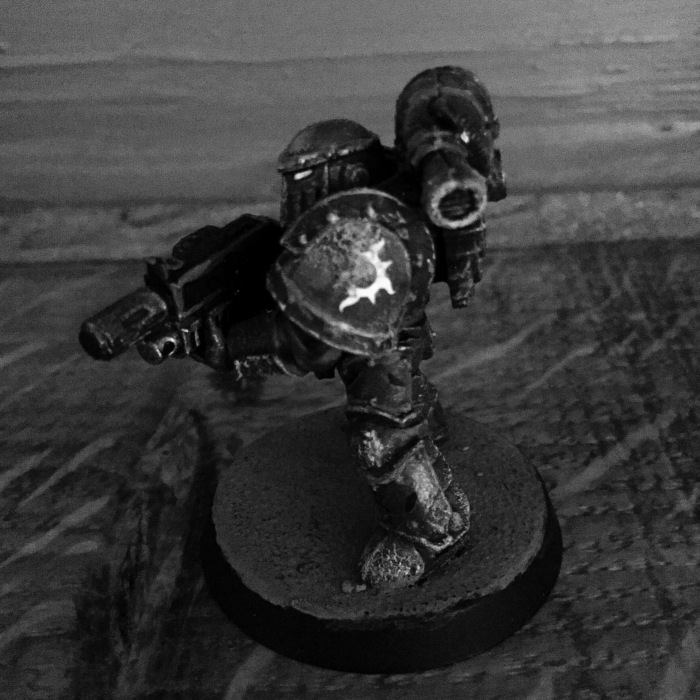 Bearing the legion symbols of a forgotten age, Malhett is a rusting relic that will never be remembered once he finally falls. Either by a killing blow from battle against the Imperiums enemies, or be consumed by the ‘change’ and become a warp tainted monstrosity.
__________________________________

I hope you have enjoyed this post. If you have any questions, post a comment below and I’ll reply back as soon as I can. Thanks!