Last year I wanted to try something new and fresh for my hobby past time, that was historical miniature collection. Inspired by subjects like the American Civil War, WWI, WWII and many more, I wanted to try my skills at more mature themes outside my comfort zone.

However, due to several media coverages on historical miniature gaming being put into question, I decided it would be best to stall my projects and scarp posts in fear.

But I’ve decided after many months of thinking about wether to return to historical miniature projects or not, I was finally swayed back after seeing 1917. It made me realise that it can be all too easy to forget, and dangerously neglectful if the memories and sacrifices of those who gave their lives for our future were to be lost.

I think back to my Great great uncle who served in the Royal Navy as a 2nd class stocker on a steam drifter ship. How he gave his life to power the ship to patrol the British coast waters in search of mines. Which he eventually lost his life after a German aircraft bombed the ship and all its crew.

His memory and sacrifice was nearly forgotten as his story was lost along with photos of his existence. A ghost. All we have is a record of his service.

Its the stories of those who experienced the horror, tragedy, hardship, bonding of comradeship and most of all sacrifice. My historical miniature project work is a way for me to research such stories and experiences and represent them in miniature form.

My first project will be focusing on Stalingrad, the city of fate.

I’ll also have a few side projects such as my WWI French forces diorama.

This time I’ll be able to cover wider range of subjects without the need of point lists and gaming formations, just to present dioramas and photography presentation.

That’s all for today. If you have any suggestions or themes you’d like me to cover for a historical project, post a comment below for your ideas and inspirations.

Recently I found an issue of Warhammer Conquest at a local newsagent, three in fact too! One being some paints, another a scenery sprue (the easy build one) and a set of sergeants and a captain in Gravis armour. I knew which one I wanted!

So I’m working on some small diorama projects that won’t be part of any existing Space marine collection, as I don’t think the models will be useful for my Crimson Fists and Black Templars. Having these miniatures as side projects will be more fun trying out new chapter colour schemes.

Primaris Captain in Gravis armour, Spears of the Emperor chapter

I’ve got two more models to build, one being a Primaris Intercessors sergeant for the Carcharodons chapter and an undecided Primaris model to build.

Today’s post is a pretty special one as I can finally reveal my week long work into my latest project, a son of Horus. After acquiring some second hand HH books I found at the charity shop (I got False Gods, Tales of Heresy and Nemesis at a good bargain!), I started reading False Gods by Graham McNeil and absorbed by the story.

Whilst most books I read are enjoyable and sometimes get me hooked in to the narrative, I do however only get drawn deeply into the story of it’s ‘That’ good. Such examples are HH Scars by Chris Wright who’s book I read in a week, painting a bloody enjoyable story about a legion that doesn’t get much spotlight in the Horus Heresy. Another example would by Josh Reynolds novel, Soul Wars, which equally rarely got put aside from my inquisitive gaze.

Years ago I listened to the audio book of (unabridged) Horus Heresy: Horus Rising by Dan Abnett, which was voiced by Martyn Ellis. I really enjoyed the story about Horus and his sons as they marched onwards into the Great crusade, with a sense of close brotherhood and unity that would tragically end as we all know it. False Gods faithfully carried on the strong aspects of the first book, and added more action and drama as the story revs up the coming of the Horus heresy.

I wanted to create a tribute display of the sons of Horus by combining past, present and future bits and symbolism to present the journey of the XVI legion. Now controversially, I’m going to use a Primaris space marine model as the centre piece for my display, as the model fits close enough with MKIV power armour (with the difference being more smoother and polished war-gear). Whilst many will say this is lore breaking (I’m not complaining about that criticism), I can’t get MKIV kits due to it not being in stock in my local hobby shop (the price too!) and FW, well, that’s another dilemma.

So with that, I started to kitbash my marine with parts that would fit closely with the look of a son of Horus. 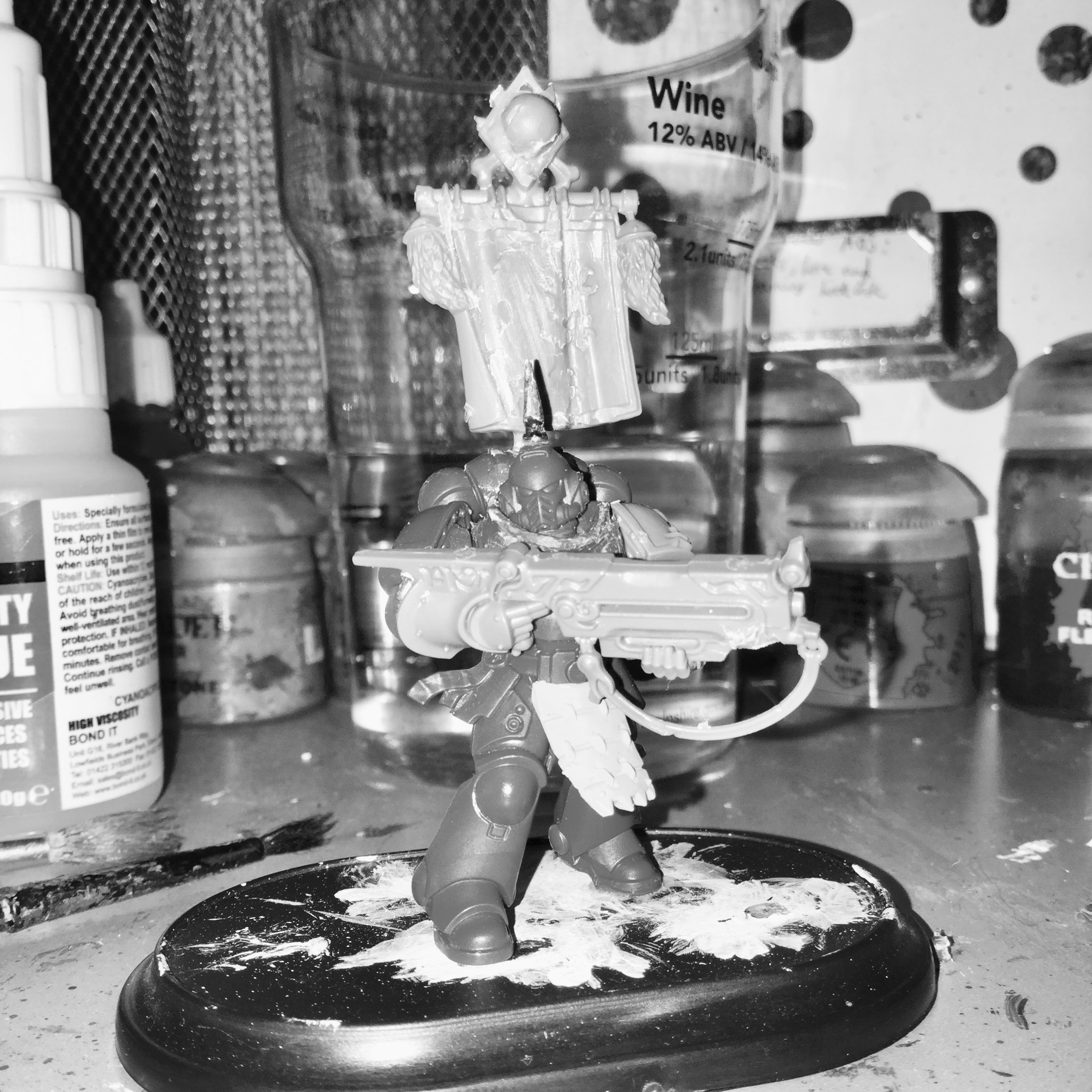 I used bitz from various kits including Ork Nobz, Chaos trophy spike, Stormcast Eternals Judicator, Space Wolves, and various other kit bitz for my model. The base was taken from the Wild West Exodus range, which looked just right as a display base. 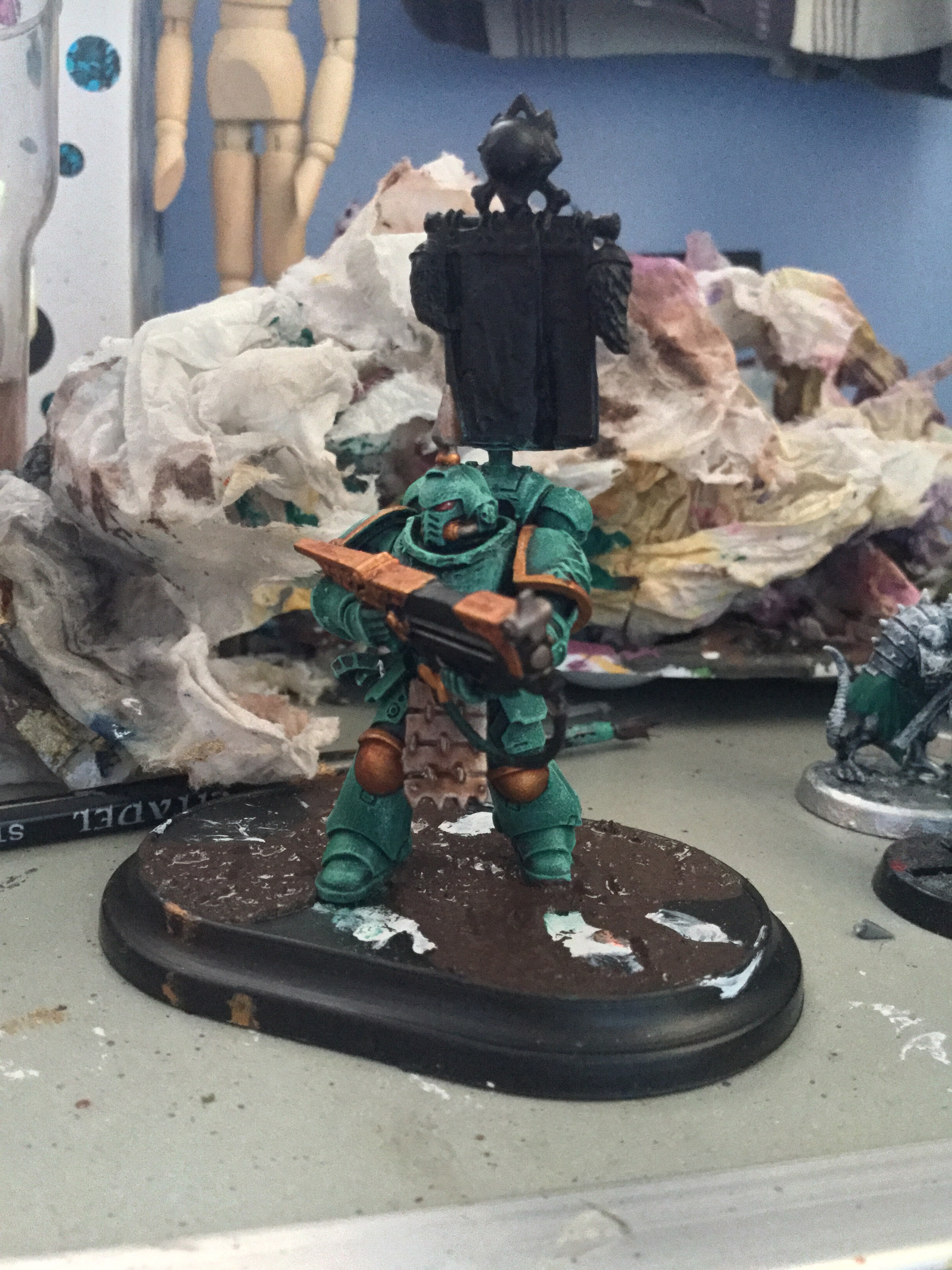 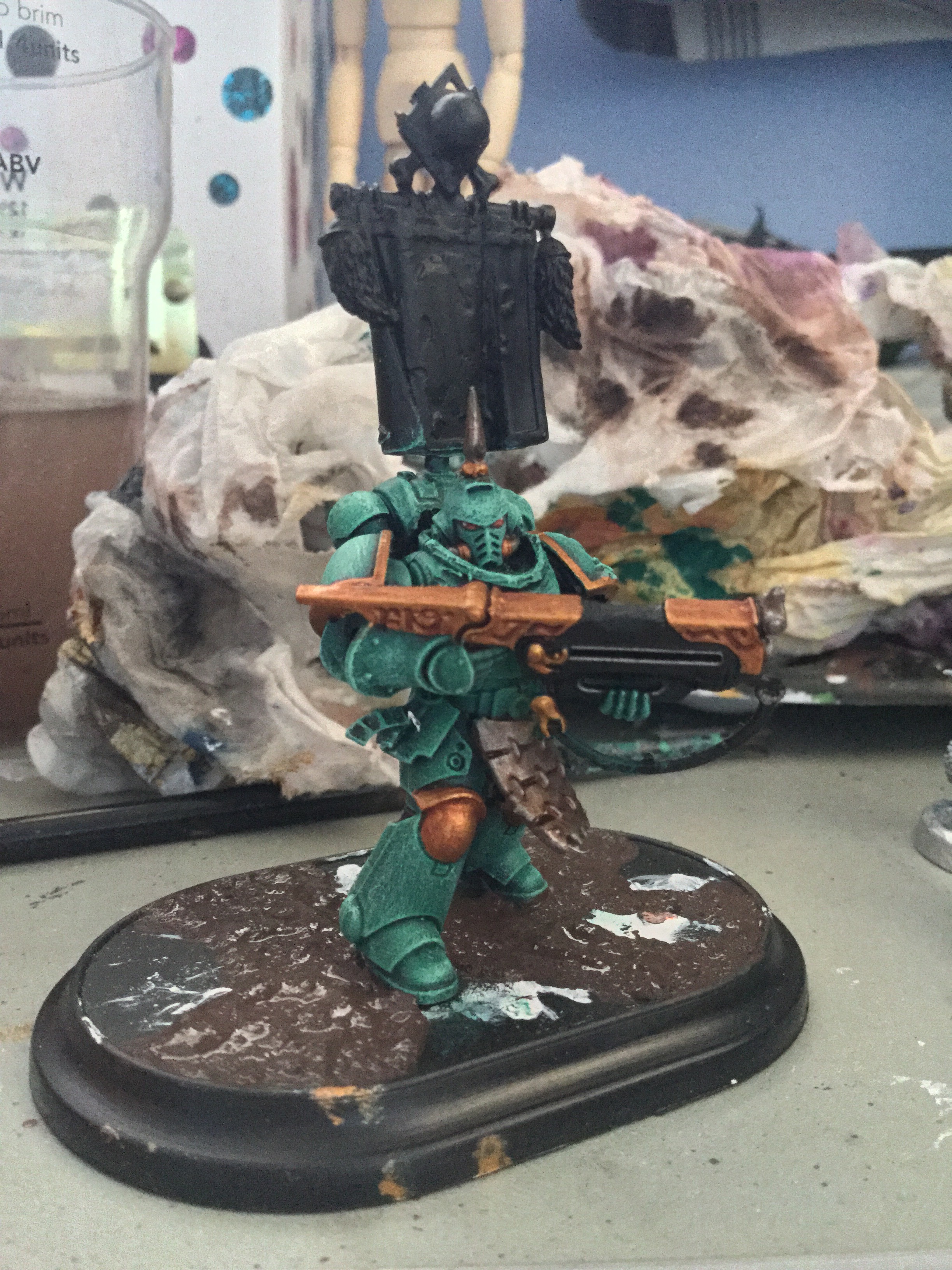 For the base, I was inspired by False Gods description of Davin’s Moon which was a bog clouted environment. It was here where Horus fell and marked the first step towards damnation for the Imperium. I imagine this model is recreation of the scene where the marines were stacked by cyclopean corpses (Plague Bearers I assume), the marine striding forwards to attack in the name of the Warmaster. 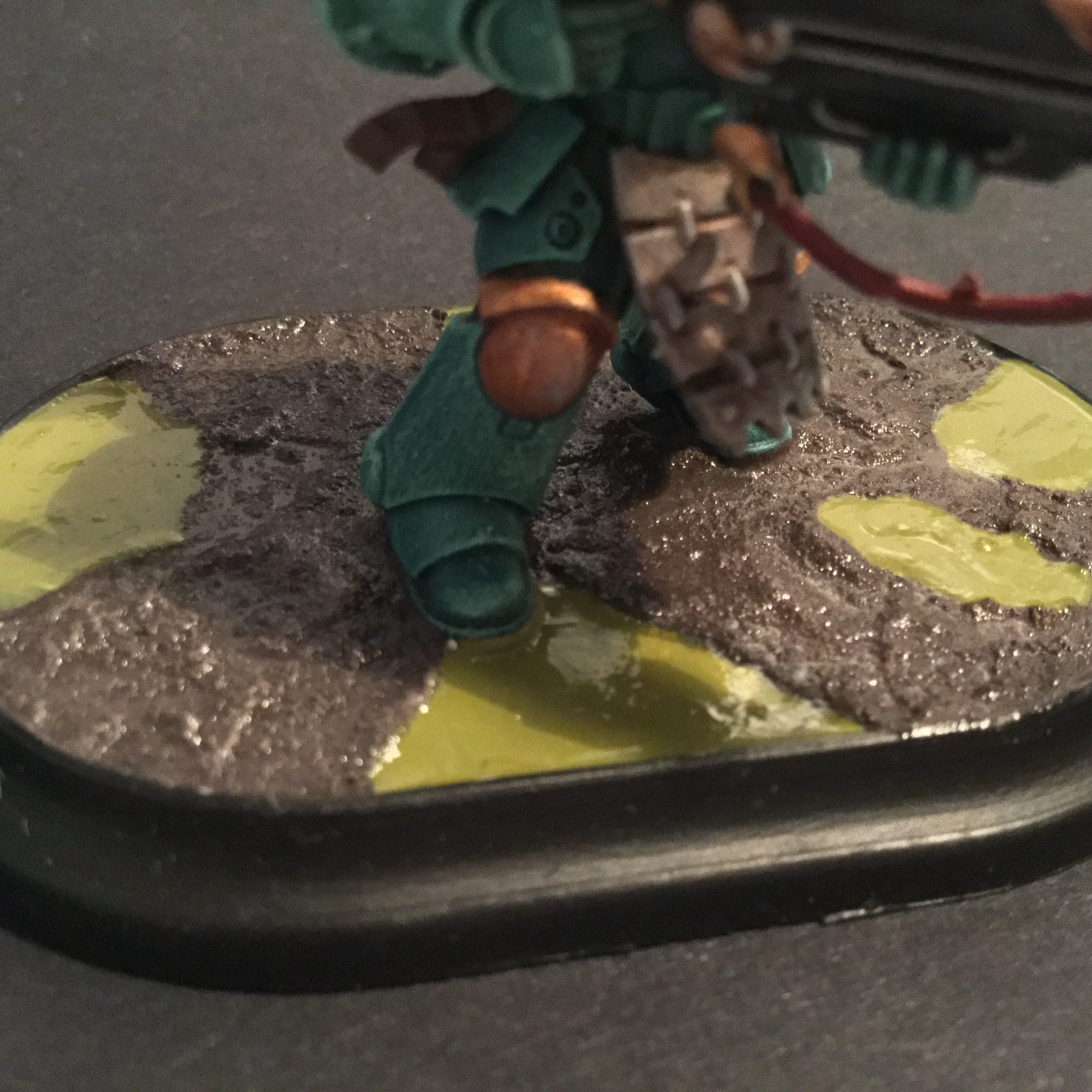 Once the model was painted, I sat back and looked at my latest project with much satisfaction! 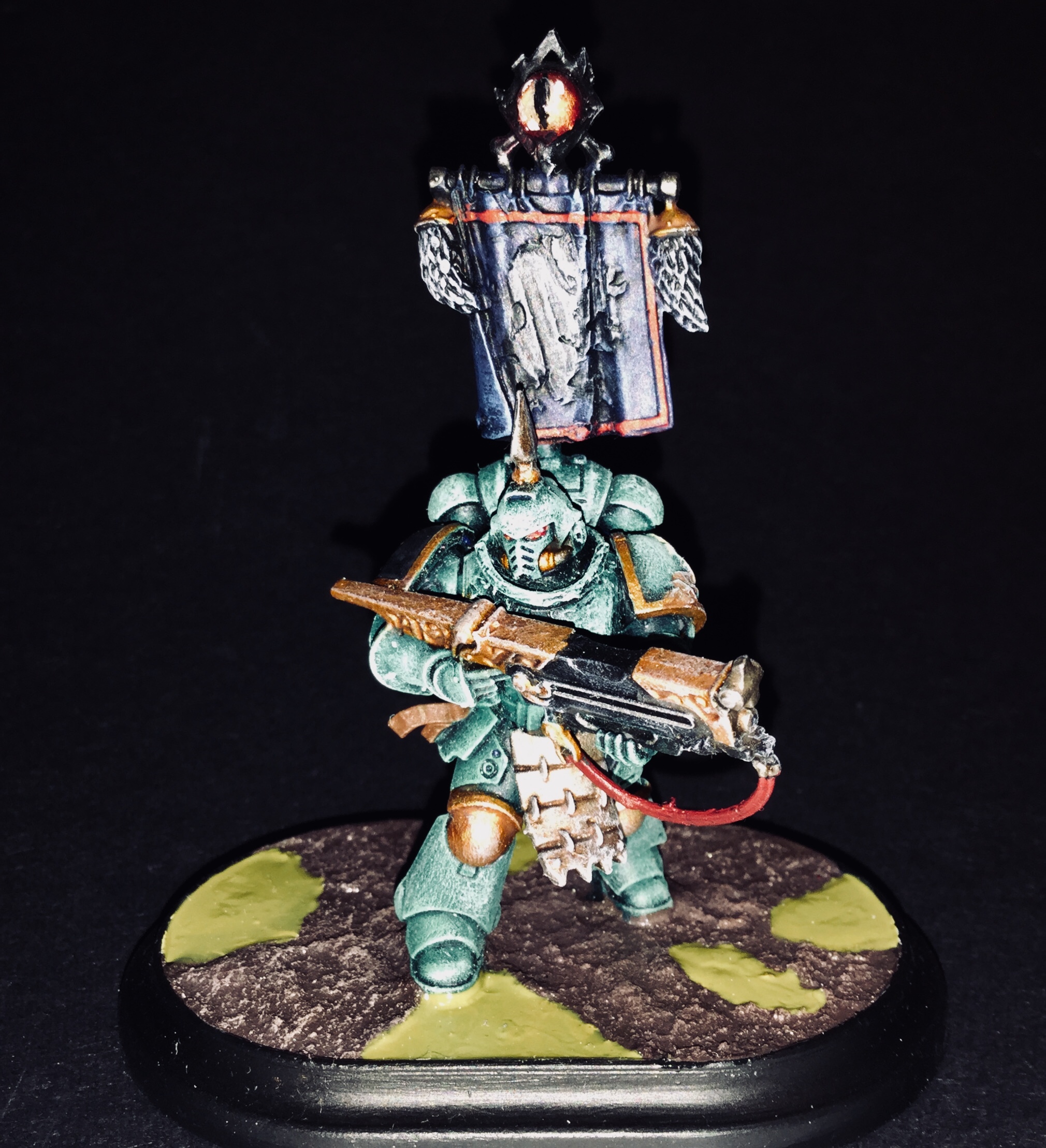 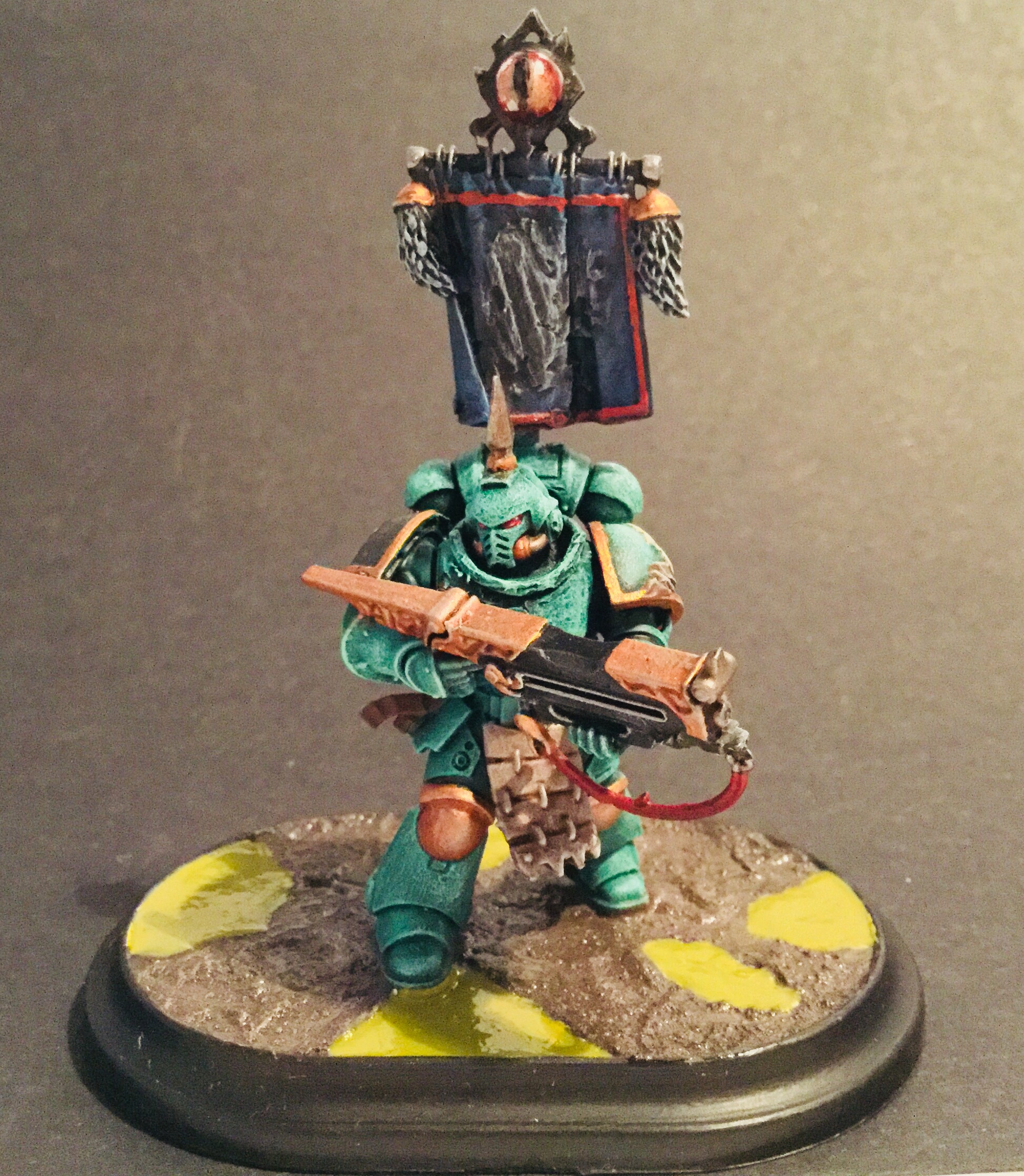 The model has a few hints towards the past, present and future of the legion, including some additional parts that I thought would fit the look of the model. 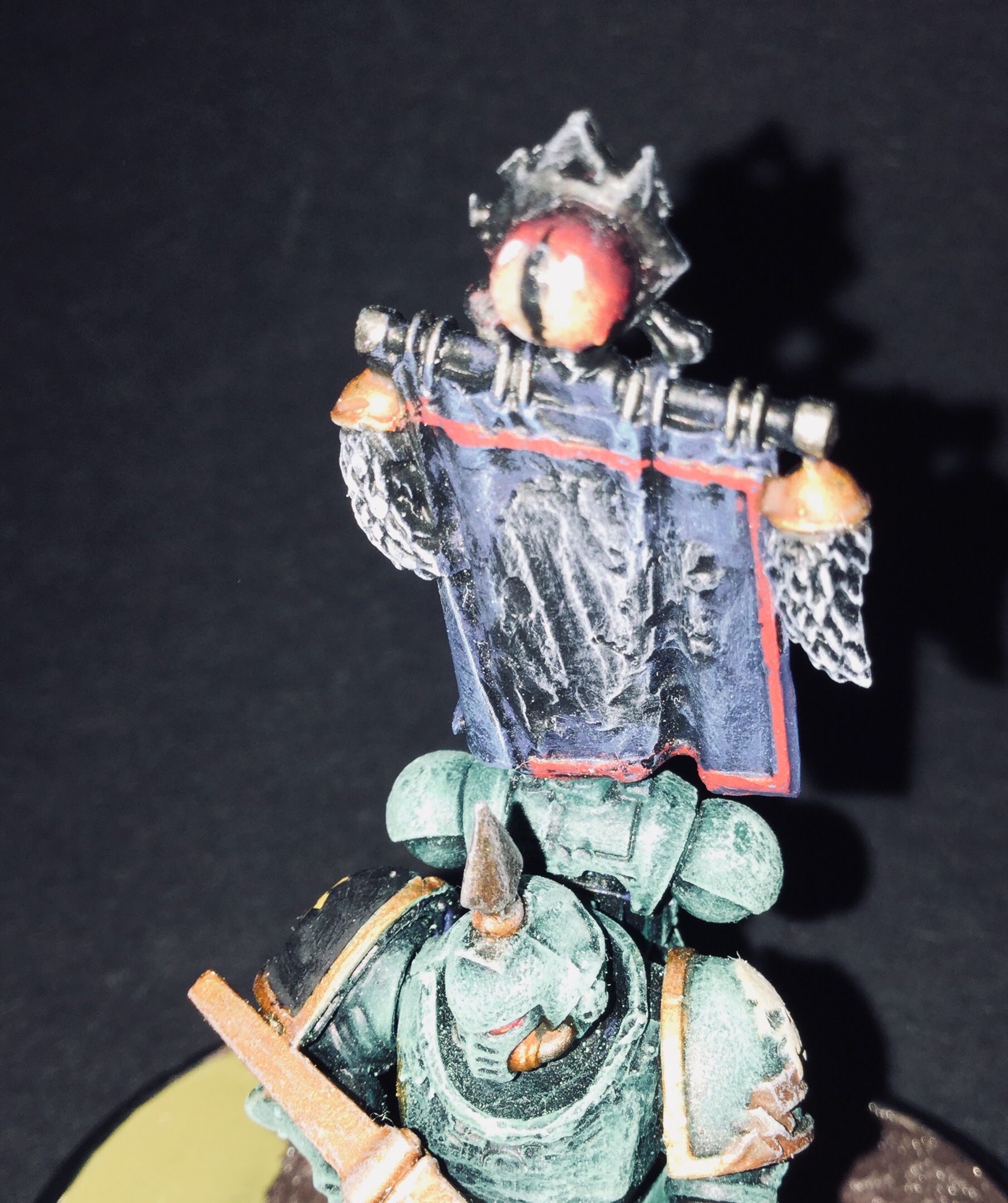 The banner was added to represent the past when the legion was originally called the Lunar Wolves. Hence why there’s wolf totems, with the eye of Horus representing the Sons of Horus. 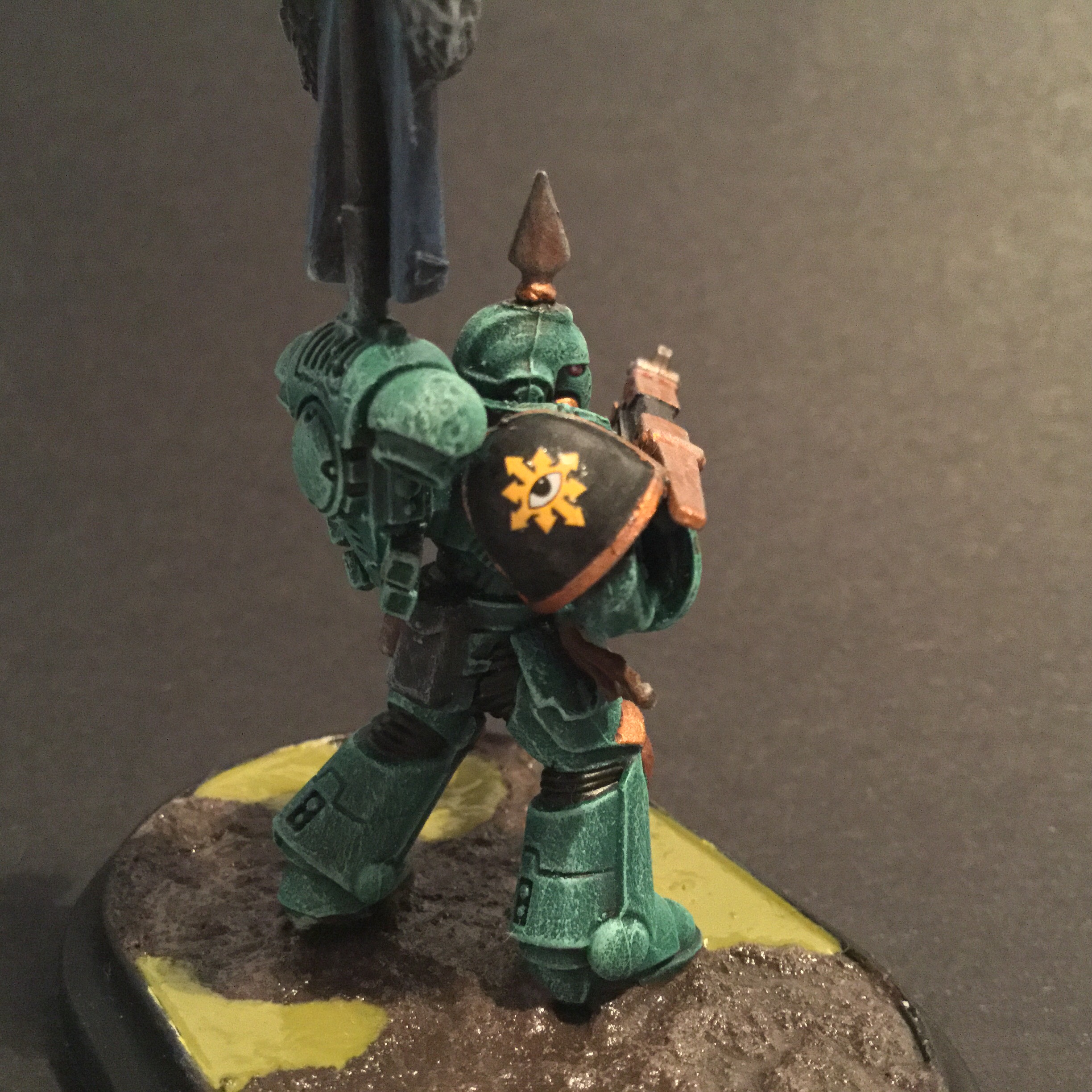 The right shoulder plate is what the Black Legion will bear as a mark of shame, after the death of Horus by the Emperors killing blow. This represents their future as a legion of broken pride and the loss of brotherhood. 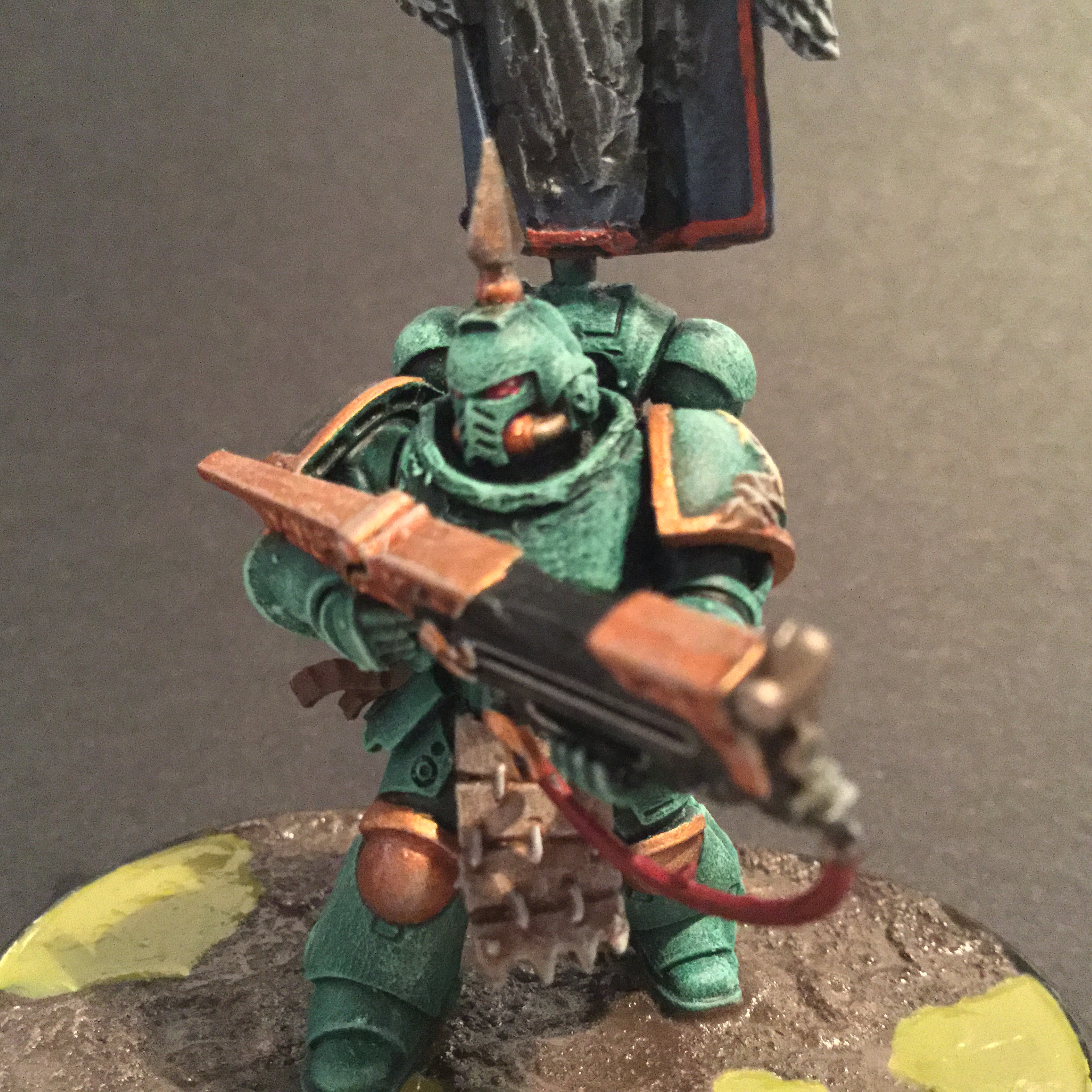 This variant of bolter is a lost STC design that looks more bulky and crafted with gold casing. I imagine the legion would use to be able to equip these for ranking sergeants and lieutenants. The sea green armour represents the present day, as the glory days of the legion and it’s downfall.

This project was a fun practical challenge, and one that’s lifted my spirits after a week of absence. I would like to try more of these smaller projects if I can find inspiration and materials. Maybe an Iron Warrior or even a Word Bearer?

I’ll leave that choice for another to plan, I think I want to take a break from painting for a bit now that Christmas is soon approaching.

I hope you have enjoyed this post today, and I wish you a merry Christmas!