My current AoS hobby projects are the Anvils of the Heldenhammer Sacrosanct Chamber, and the Nighthaunt procession project. Both projects are just about worthy of 1,000pt game, now that I’ve got reinforcements from the Mortal Realms series.

But some of the Stormcast issues will be going towards my other project (used to be called Lords of the Pisces Stormhost), building a Sacrosanct Chamber to add to my growing Stormcast army. I’m working on a new Stormhost name and lore to my army to fit into the current lore and tone of AoS.

Starting my mini Sacrosanct Collection is my first hero model, a Knight-Incantor with a recently slain Ogor head! 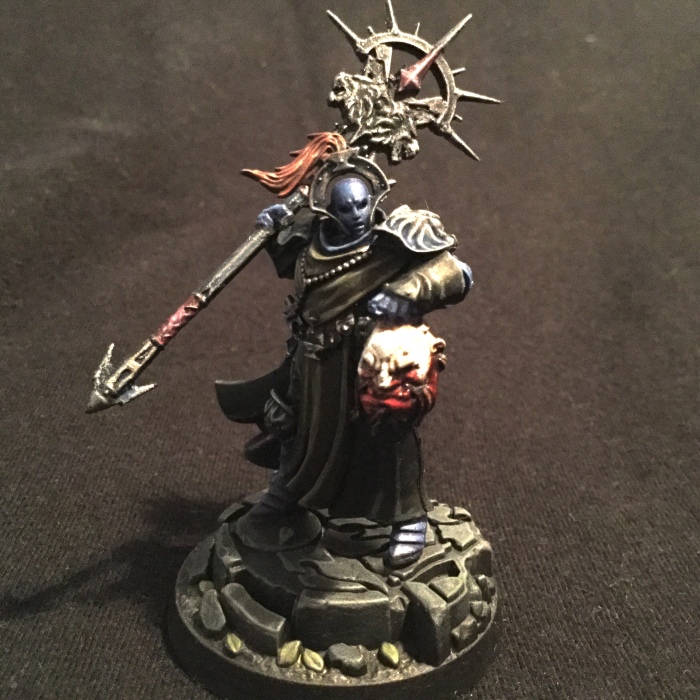 I miss painting blue armour as I liked the pastel blue tones, it’s been awhile since I’ve painted anything for this army project. With the Mortal Realms, I’ll have plenty of additional units to include for this project. That’s if my newsagent will reserve my copies still, so my goal with this project is to build and paint units as they come.

Very soon I’ll be be doing a post on the Stormhosts new name and lore, a more consistent and less exposition backstory to my army. Whilst the Lords of the Pisces was an ambitious project to develop my own Stormhost and backstory, it was made during a time when AoS was early on in its established setting with holes to fill.

Looking back, my backstory work was heavily focused on the history and mythology of my army’s origin. It’s good, but it didn’t really go anywhere in the end, I didn’t even go into detail on the Stormhost itself.

That’s why I’ve decided to scrap everything and rewrite my army now that there’s more inspiration and a clearer scope for the setting of AoS.

That’s all from me for today. I’ll be sure to show more Sacrosanct models for this project very soon.