It’s taken me some time to work on this project after weeks of paint striping, glueing and painting my neglected Chaos Space marines. I have way more to work on which is taking more time than usual (Warptalons are a pain to brush off), but thankfully I was able to get a few units ready for painting.

The project was inspired by years of reading the Night Lords lore, which all started with my first audio drams CD, Throne of Lies by ADB. I was torn between painting the 8th Legion or the Word Bearers, both have been my all time favourite traitor legions (but Iron Warriors will be #1 in my biased opinion). But I finally went for the Night Lords after being inspired by reading Guy Haley’s Primarch novel, Konrad Curze: The Night Haunter.

My army project was blessed with a good variety of neglected miniatures, as most of them fit well into a Night Lords Legion warband. No heavies, no tanks and no Daemons.

After doing the most boring job of scrubbing off the old paint, I looked through some painting guides to see which one would fit well for the Night Lords Legion colour scheme. It just so happens that I found just what I was looking for in one of this years WD magazines, which had an article on painting HH Legions. I followed the Night Lords Legion colour scheme, albeit using a drybrushing method to create as less thick/ build up layers as possible.

My army already had a good candidate for being the leader of this warband, HH character series Sevatar, 1st captain of the Night Lords Legion. Obviously I won’t be playing this model as Sevatar as he’s very much dead in the 41st millennium. But the model looked so good that I wanted it to be a captain of my warband. 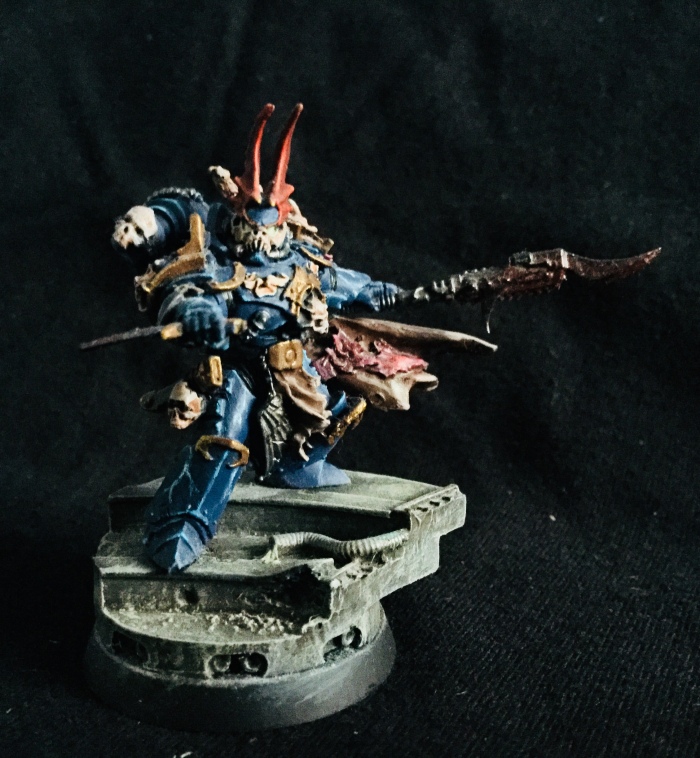 I then expanded the HQ roster by including two Chaos lieutenants, substitutes of Chaos Lords as there aren’t any rules for lieutenants in this edition. Both demi company leaders will give me more creative ways of building my army lists, so even though my collection will only be a demi sized army, I can at least play it by playing one lieutenant or the other to represent two demi companies. 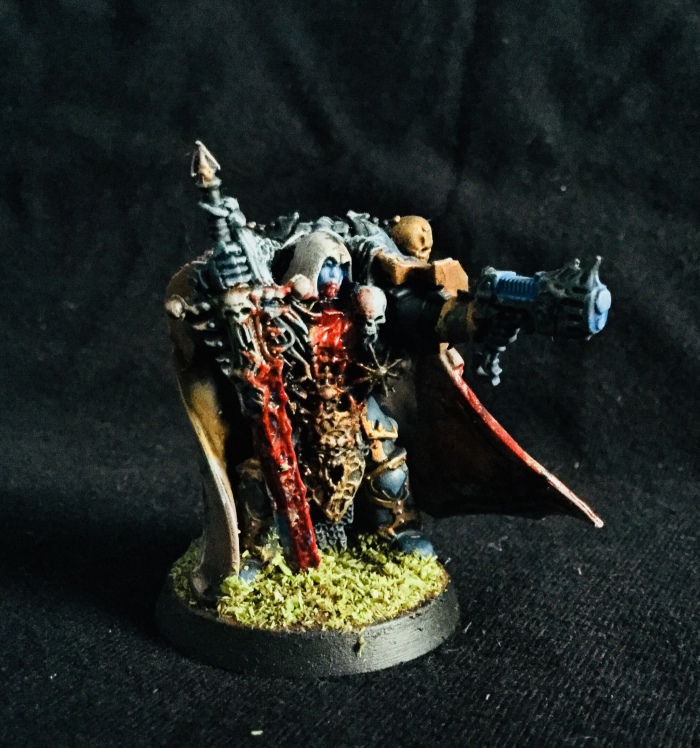 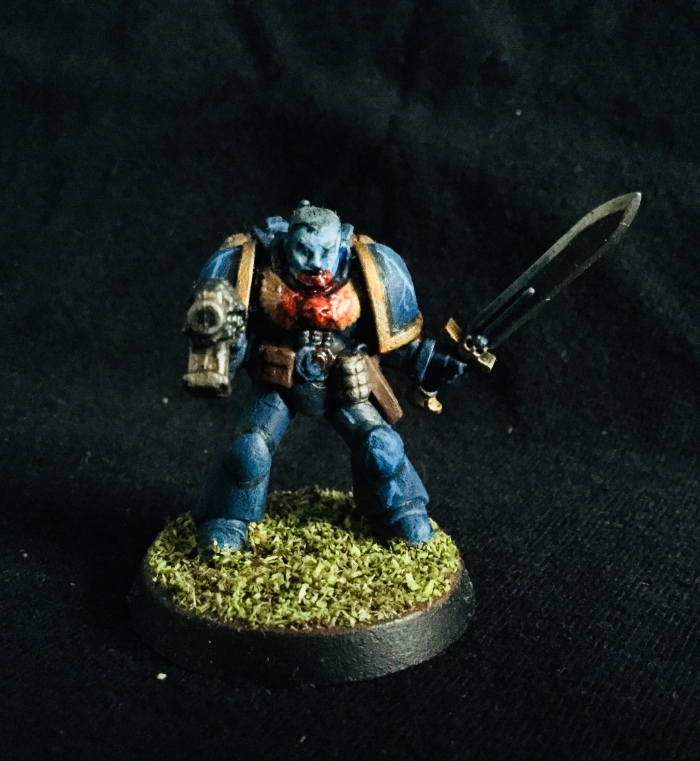 Every Night Lords Legion has a couple of units of CSM as the backbone of terror tactics, for Skirmish or full on slaughter house fest. When rebuilding this unit I stayed away from the spiked helmets and horns, instead I went for a mix of scavenged armour marks and less cartoony looking marines. I would have liked to add some bat wings to the helmets but I didn’t have any spare bitz to replicate that. But I think that’s more fitting for the elite units as they’re the veterans who have been fighting since the Horus Heresy. 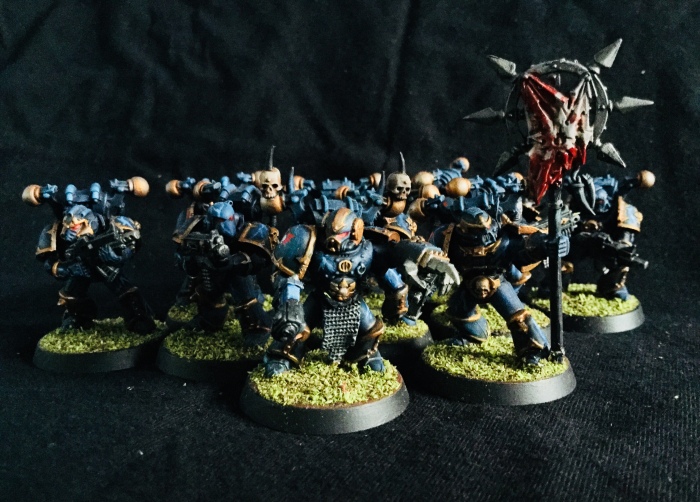 Sometimes a Captain or a Chaos Lord May bestow a great warrior, butcher or close ally with the rank of a champion. Both as a mark of respect and internal order to keep the eager throne takers a close eye on. One day they can be persuaded to rally at your side when you need “favours”, better to use your enemies ego of his new rank in your favour.

A rank of champion is a burden not only by your lord and master but also to the Dark Gods who also must be appeased with. 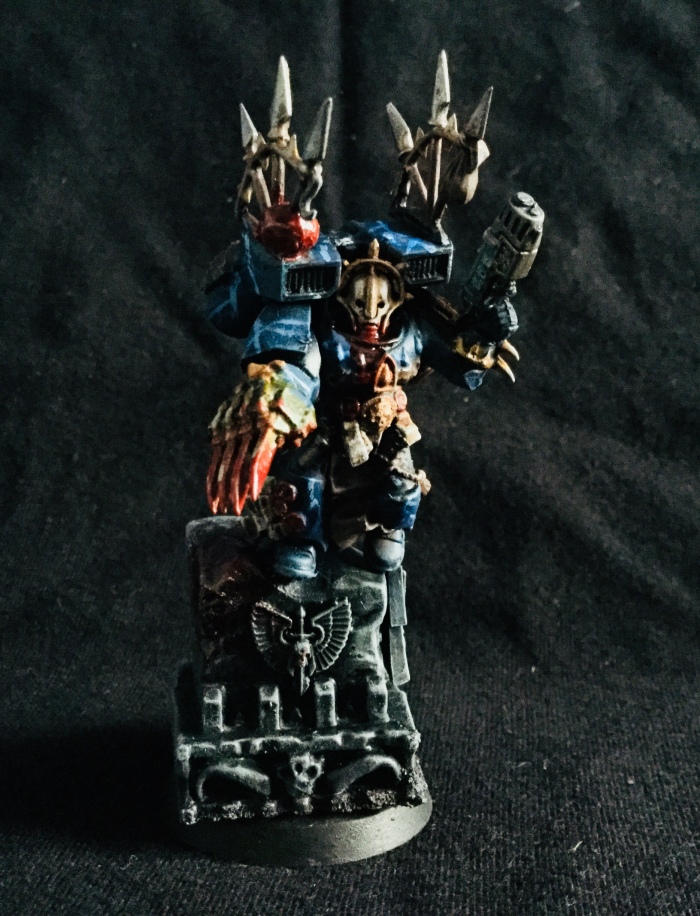 Whilst it’s rare to see both the Word Bearers and the Night Lords working together from their hatred of each other, some warbands May employ a Dark Apostle in their ranks for spiritual empowerment, focus of the mind and worship to the Dark Gods.

The Night Lords loath the Word Bearers who have embraced the Chaos Gods, seeing them as Slaves and weaklings who have been possessed by Daemons. However the Word Bearers despise the Night Lords for their shallow state of affairs, lurking in the shadows like cowards who do not embrace the Dark Gods gifts. Instead they use Chaos to their own ends without praise or acknowledgement.

How a Dark Apostle would join a Night Lords Legion warband is a mystery, either accepted for spiritual guidance, a pawn in a grander scheme or even a slave by the Legion. 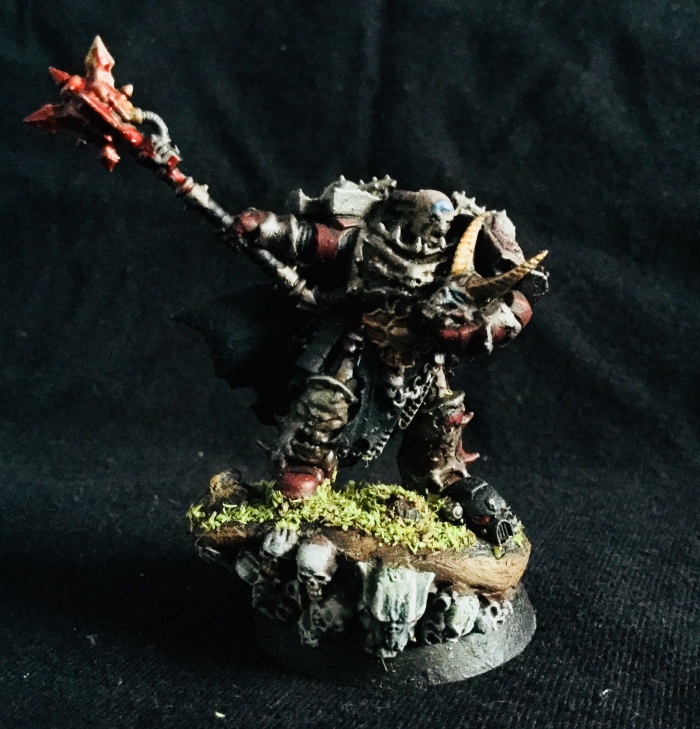 The Night Lords use bike squads as effective units for counter attack, encircling the weak close to the prey, or strong and capable fast cavalry to capture and secure key objectives. Whilst the legions bikers are a pale comparison compared to the White Scars speed, the Legion nonetheless would prefer to cause fear and terror as they pick on easy prey at high speed. 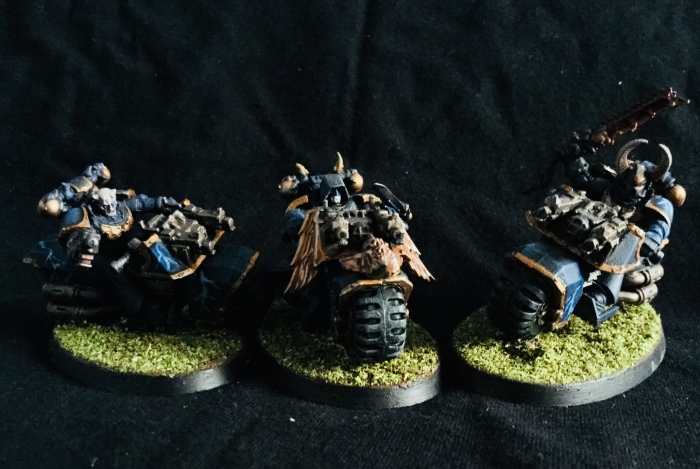 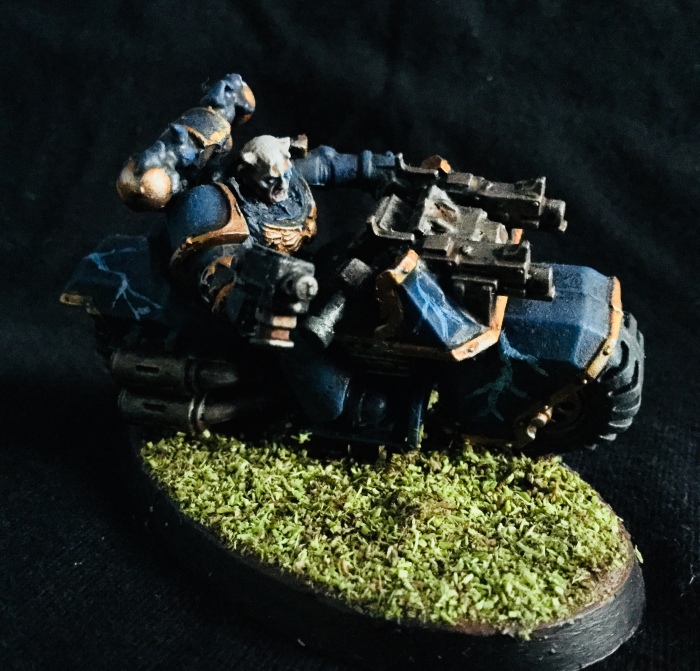 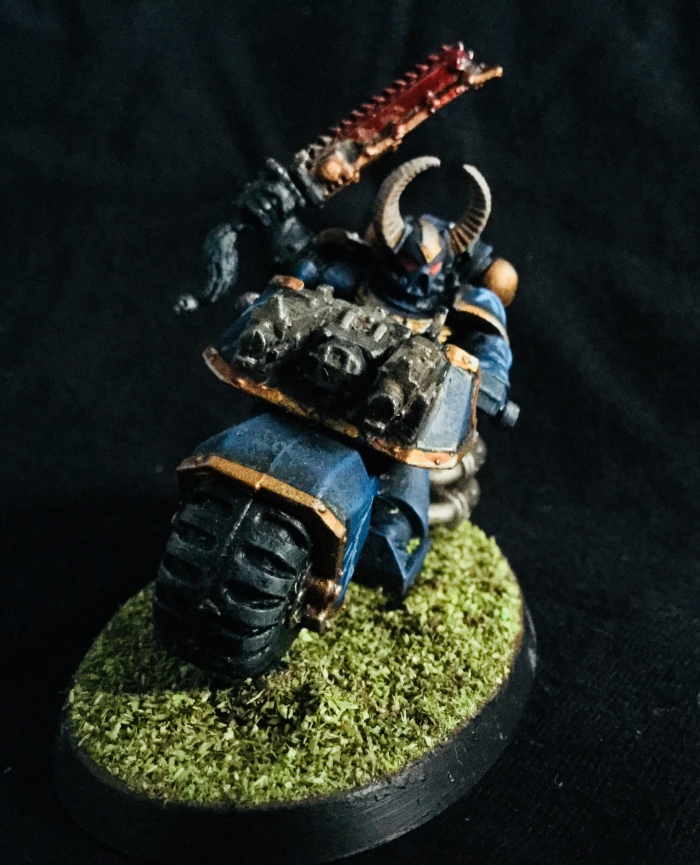 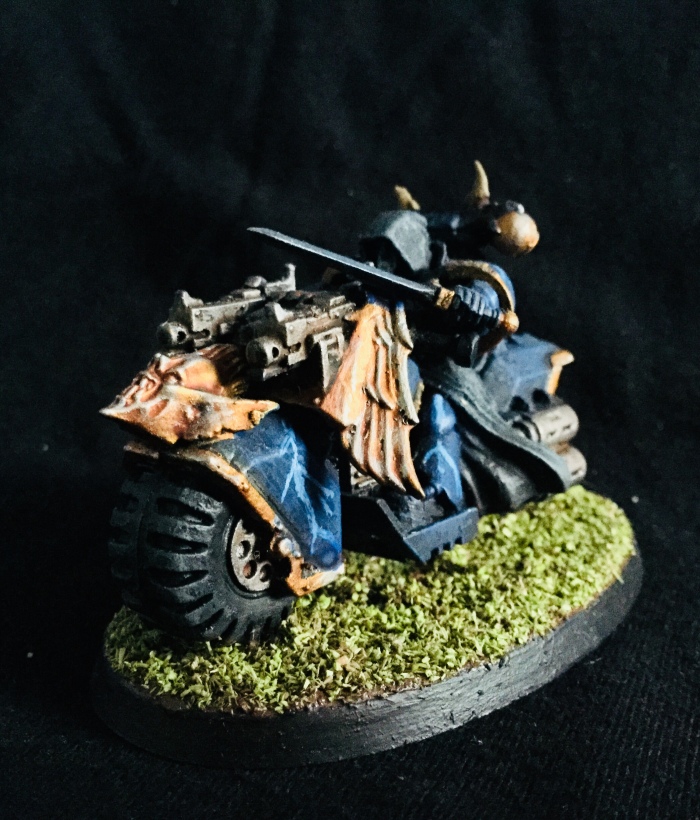 When Konrad was slain by his forseen killer in his visions, his remaining sons left to spread out into the galaxy. Even his elite warriors, the Atramentar, left their farther to his destined fate to die by the assassin.

In the current day of the 41st millennium, the Atramentar are but shadows of their former roles as they seek only to kill the weak and helpless. Honour, pride, selflessness, valour and sacrifice means nothing to the elite sons of Konrad Curze. Instead they serve their Captain and his warband by brotherhood of gene kin, not by love or bond but in shared desire to prey in the shadows for the kill. 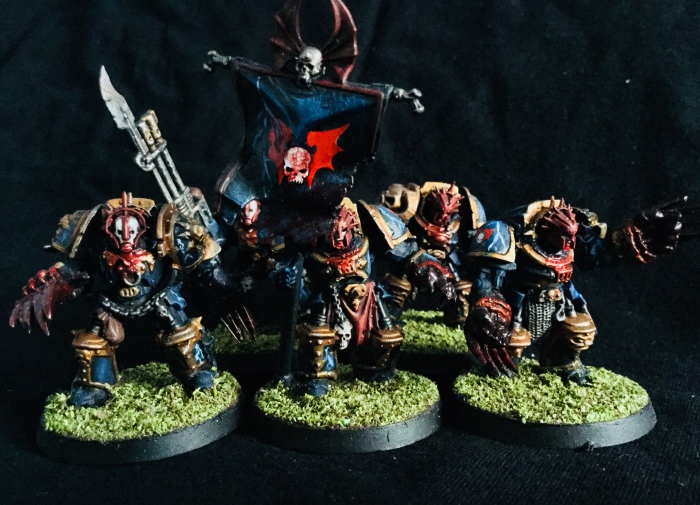 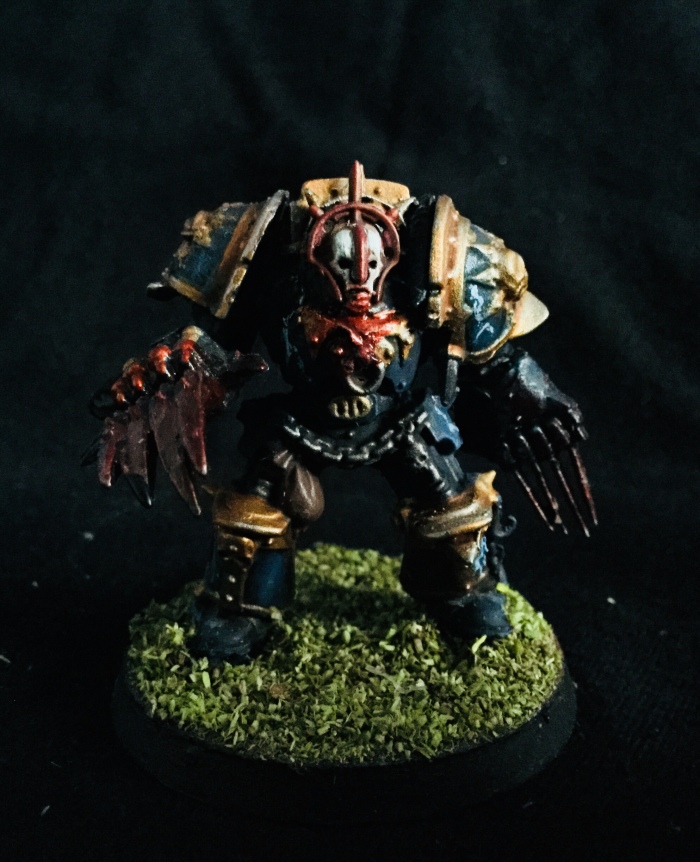 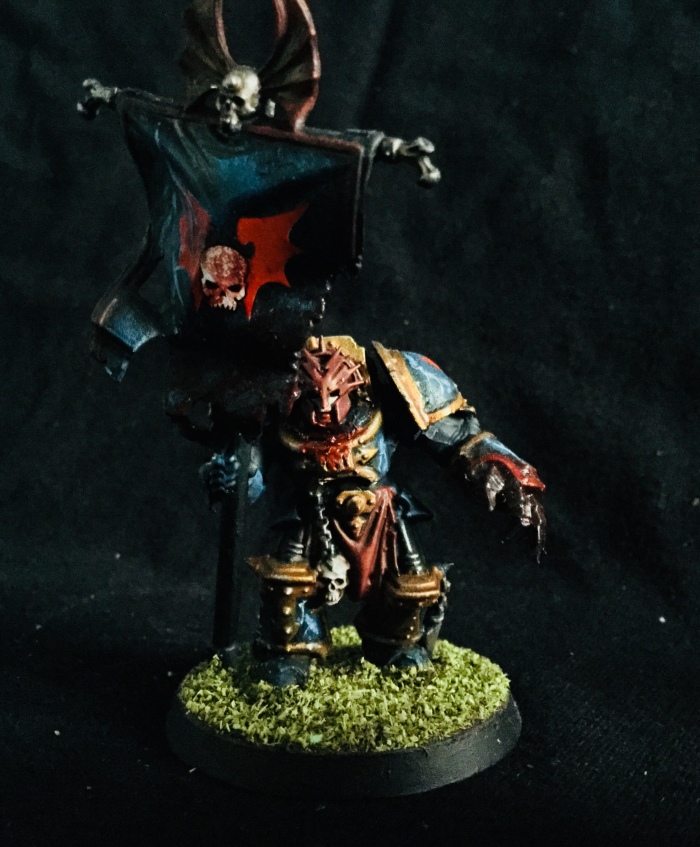 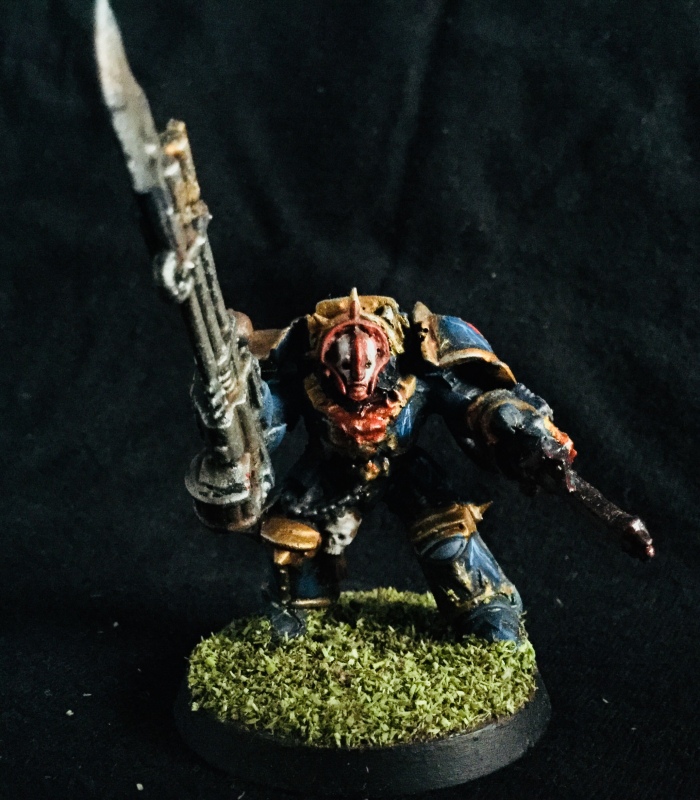 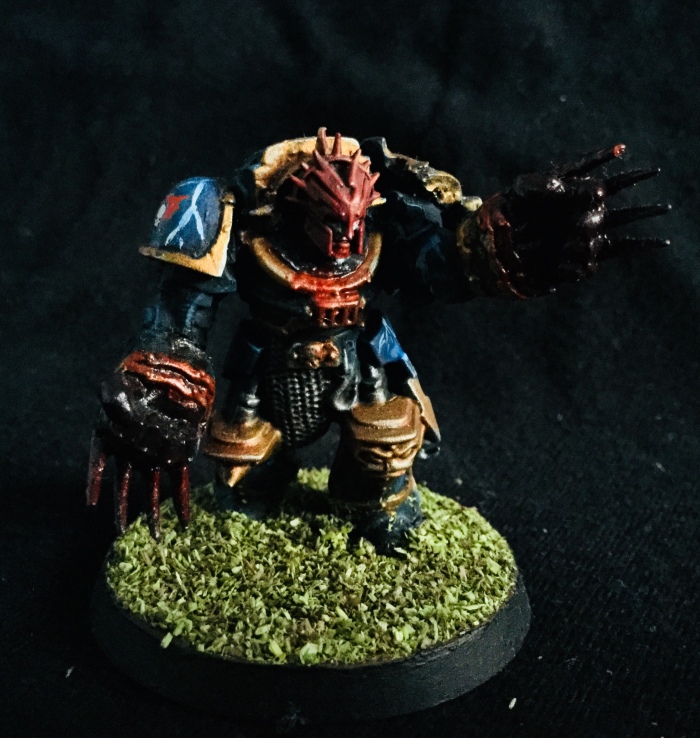 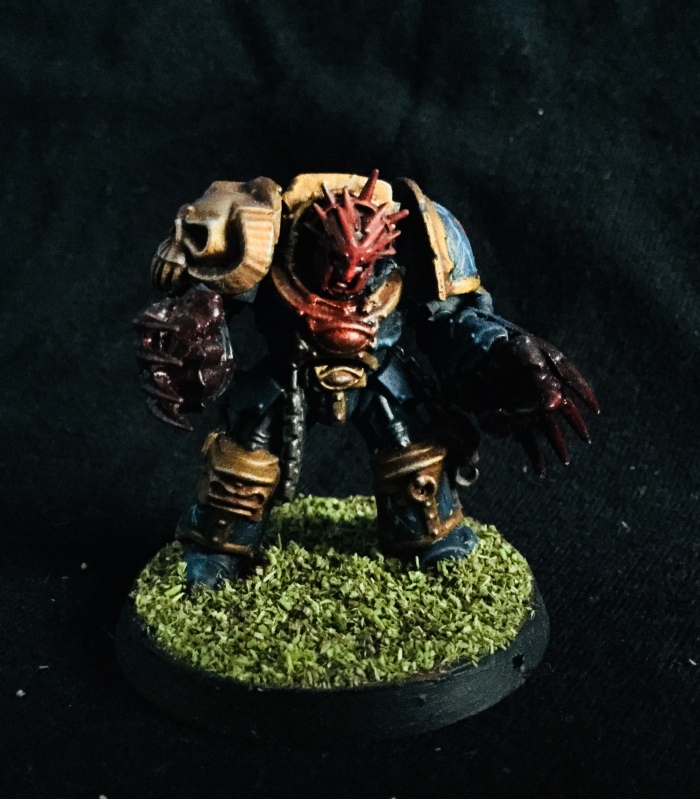 Hellbrutes or Chaos Dreadnoughts to some are prisons for the damned who have either betrayed their masters (or were betrayed themselves as lords of a warband), or ancient warriors who were interred in their coffins and hooked into their Dreadnoughts during the Horus Heresy. Some have remained unchanged for many centuries by luck, favour of the Chaos Gods or properly maintained.

But most go insane and be possessed by Chaos.

Librarian Dreadnoughts are a rare sight to see for its rare for a Legion to inter their librarians into a Dreadnought. For Chaos, this would prove valuable to inter those tainted by the warp as conduits of the warp. To use psykic powers and be heavily armoured would make you near invincible. Or so many would think until you realise that madness and horror will consume you much faster due to your talents in warp craft.

Over time the librarians remains will bond with the machine as it wraps and shapes into an abomination. His powers grown more powerful and unstable as he changes and loses his remaining humanity to his insanity. It’s better to be slain than to be put into a dreadnought and forever be trapped and cold in an unfeeling casket of darkness. 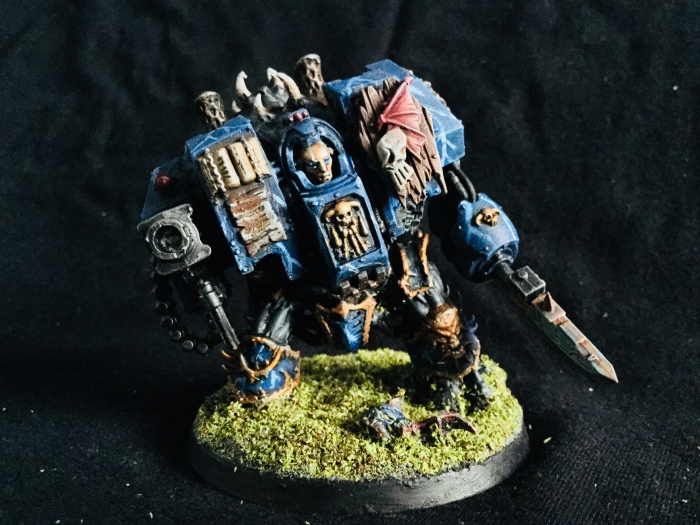 With that comes the end of this part of the Night Lords project. I’ve done quite a lot of painting over the past few weeks as well as scrubbing paint off neglected models. Having put the photos up on this post, and seeing my shelf filled with this collection has made me really pleased.

I think it was right for me to redo my entire Chaos Space marine collection + neglected models, those that couldn’t fit into my Iron Warriors project can now be used for this project. Comparing this to the Harbinger Legion further makes this project look like an improvement compared to the old simple and less interesting colour scheme.

I will be posting more units soon to the blog once I’ve got more scrubbed and ready to paint. This next lot will cover some interesting units like my kitbashed Helldrake, an altered Stormtalon with four engines and two big flamers!

3 thoughts on “Lords of the Night”