Today’s post will be focusing on my Death Guard Iron Warriors, those of the sons of Perturabo who have succumbed to Nurgle’s blessings. As part of this years summer goal, I’ll be showing all of my current army projects works that I’ve done so far this year. 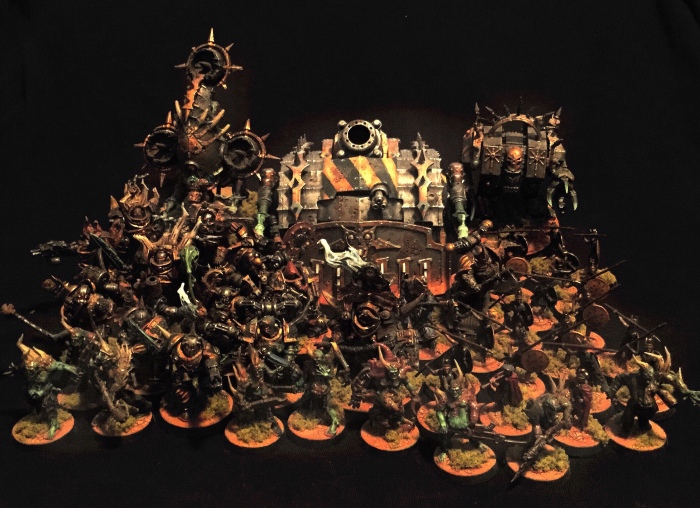 Starting off as just a passion project, my Nurgle devoted Iron Warriors soon got a lot of traction as a growing army project. Rather than boosting my first Death Guard project, The Harbinger Legion, instead I have given the Iron Warriors the big stuff after completing the Know no Fear set.

There was never a set goal on where I wanted this project to go, no set point list or detachment. Just a project I wanted to paint with as much effort, skill and passion. But still stuff kept getting added, as if limitations and goals being put to one side actually helped me?

Now that’s not to say there was no structure at least to follow, I have the basic army formation of at least a single troop choice and a HQ choice. But Know no Fear did cover the basics.

My last task for this project was painting a substitute 20x Cultists and a Tzeentch Aeldari Wizard. The cultist were substitute from a historical miniature kit (couldn’t remember what the company was called, nor the unit itself), but they fit the role as Olympian cultists of old.

As for the Tzeentch wizard, I had thought of using it as a Blades Khorne Bloodstoker substitute, but the design of the model looked perfect for an Aeldari Wizard. I used a Skorne kit from Privateer Press to substitute this model.

The wizard was used as a fun narrative story of an Aeldari Seer who instead of being consumed by Slannesh, offered her soul to Tzeentch to save her from being damned for eternity. Irony then that she became a slave to his whims of devious plots and threads of fate. Long story short, she’s now an ‘ambassador’ for the Iron Warriors warband afflicted by Nurgle. A point of diplomacy for the Tzeentch afflicted Iron Warriors and the Nurgle one’s.

If I feel the Nurgle aspect of the project is getting stale or naturally at an end, then I have an opportunity to continue this project by adding Tzeentch models to the project.

I just don’t know how to break the news to papa Nurgle that I’m seeing Tzeentch for my project, I think I’m longe overdue on my diseased library of infection returns……

With that direst of concerns that’ll be all for today. I’ll be back tomorrow with another army project, one that hasn’t been worked on this year, but will be the focus of my current works. Funny enough, it’s my Maggotkin of Nurgle!