Today I wanted to show my current progress for the Crimson Fists project, which is already nearly reaching its end! However, there’s still much work to do before I can officially say the project is done. I have some transfer work to do (tedious and irritating to attempt) and start painting my latest kitbashed model.

Fresh units are ready for the battle against the hated Ork menace, with Hellblasters and Intercessors. I’m still working on the transfers for the Intercessors with squad markings and chapter badge.

Regular readers of my blog will recognise the MKIII marines looking very similar to 2017 Iron Scarab’s. Since they weren’t much use to me for a year with no future plans, I’ve decided to repaint then as Crimson Fists in tribute to the MKIII marines that fought in the fleet battle of Phall.

Speaking of which, I’ve just recently finished giving a second read to John French’s Horus Heresy novella, The Crimson Fist. Reading it has given me a better understanding behind Alexis Pollux, an Imperial Fist marine who would later be the founding Chapter master of the Crimson Fists. I can see why Rogal Dorn gave Alexis the chance to form his own second founding chapter.

Also, my lieutenant finally had a new base to finish the model off. I’m still deciding which Ork head I should use for the base, I’ve got quite a few spare bitz to choose from.

I’ve added some honour badges to show his victory badges he earned.

This is what I’ve done so far with this project for this month.

One last picture to finish this post off, I don’t really need to say who this grim chap is. He seems pretty glad to have claimed his new trophy to add to the hall wall of stuffed Ork heads. 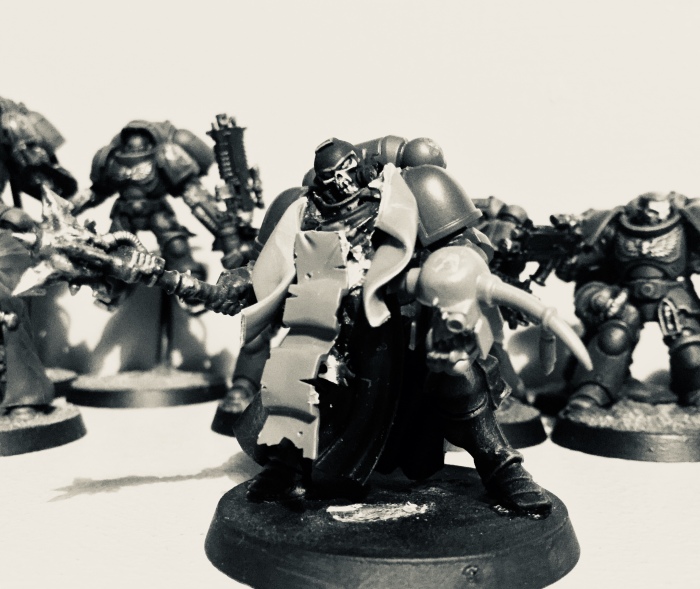 Once I’ve finished my transfer work and painting my kitbashed Chaplin, I’ll be deciding wether to have a unit of Aggressors, Redemptor Dreadnought or a unit of Reivers as my elite option. Since it’s my last choice for the collection, I’m thinking of either going for the cheap option of adding and repainting my current Reiver unit (currently Black Templars) as a 5x squad. Or I could alternatively add a heavy unit like Aggressors or Redemptor Dreadnought to add more heavy damage.

Either way, I’ll make my mind up soon and get this project done by next month.

Thank you for reading this post. If you have any questions or suggestions, post a comment below and I’ll reply back as soon as I can. Thanks!