“My ancestors once told me a tale of a great hero from the World-That-Was, a slayer king who inspired many Duardin to don the path of the Slayer, discarding the life they once had to a death oath to avenge their agenda and grudges, or repent for their past sins.

We aspire to be as determined, to be honourable and true to the oaths we bear like our ancestor Slayer king, we are the fire and steel that builds and destroys all things Chaos.

But we follow our patron gods ways, Grimnir the wrathful, the mountain splitter and the Duardin god who would challenge anyone. Even the Godbeast Volkatrix……..

My sons, remember that whilst Grimnir flows in our blood for the runes smelted in our flesh, we must remember the oaths that we have sworn to. Honour is honour, but gold is gold.

It’s taken me about a month to paint what you see in the picture above, both the starter box for the Fyreslayers and the Auric Runemaster. A very intensive project, I’ve been pushing myself to paint as much as I can (with patients and detail) to get this lot painted up. Why the rush you may ask? Well I wanted to get this first wave done so that I can contribute to the Malign Portents event.

I’ve missed my chance to join in the first AoS global event (the Seeds of hope I think it was called?), but this year, I’m hoping to do my part to join in.

But it’s not just because of the Malign Portents event, for I wanted to collect the Fyreslayers for my growing collection as part of my Grey-mane Truce alliance. An Order Grand Alliance that consists of different races joining as one to reclaim their homeland of the Grey-mane Dynasty.

Although, the Fyreslayer are in it for the Ur-gold, for they had a bargain with the Lords of the Pisces Stormhost. The Lodge of Grymthenian live in another land in the realm of Aqshy, outside matters don’t interest them unless Ur-gold is involved (the Dynasty has lots of Ir-gold in its time, so rumours persist).

Now that my first wave of model are now completed, I can now detail through my process, thoughts and overall opinion on the collection so far. So without further or do, enjoy!

when it came to painting my first model, the Auric Runemaster, I was unsure as to what colour scheme I was going to paint him. After looking through some photos of fantasy/Greek art, I had a references to create a colour scheme that I wanted.

Paint the model was fairly simple, although it took me some time to paint it, as I’ve not been used to painting much Duardin sized models. My colour scheme can be recreated from the list I’ve put below.

whilst there’s more to list for painting the model, I’ve only detailed my own colour scheme on selected areas.

The Auric Runemaster was a fun model to paint, it was quite fresh for me at the time when painting something different for a change. I think if there were any faults with the model, I’d say it would be the head position, as I only just realised it was slightly at an angle once I’d basecoated it. However, it looked fine as it was, so I didn’t need to alter it.

This is one of my favourite Priest type model that GW have produced so far. It’s sculpting has so many details and textures that not only retain its Duardin race, but also given some uniqueness like the exquisite helmet crest design and magma staff.

The big centrepiece for my collection had to be the Runefather on a Magmadroth, as I liked having my army being led by a wise old Fyreslayer with a big Latchaxe (he who opens many doors). This model was honestly the best in terms of letting my creativity go wild for painting. I wanted to experiment ways to present both the rider and beast as old and ancient, but at the same time trying to contrast both models without them looking too bland.

To realise my Magmadroth as an old beast, I’ve decided to use brown as my base colour, as compared to other brighter more colourful Magmadroths, this one would look more cooled down for its scales. I didn’t want to make this model look too plain and boring, so I’ve contrasted it with bright flame colours to show that there was still life left in the beast. (Lodge Grymthenian part 2 details the process for painting the flame effects).

I’ve really enjoyed painting this model a lot, however, I think the rider is a 50/50 when looking at it. He doesn’t look bad for the paint work, but I’m not quite keen on the outcome. Possibly worth having a second look to see if I could add anything to the rider (maybe gem effects or silver metal) to make him stand out a bit more (but not too much glare issue).

My next two models painted are the Auric Runeson and Auric Runesmiter, both painted in between breaks from painting my Vulkite Berzerkers. With these two, I had the constant motivation pace needed to get the Vulkite done (I can’t paint infantry with any speck of love and passion like other models).

I like the Runeson’s sculpt, at one point I was going to kitbash him as a Doomseeker (as the original model is now online only), but I thought the Runeson looked too good to pass. I would use him for Skirmish, as I like the idea of a young Runeson traveling around Shyish looking for treasure in forgotten and abandoned lodges.

The Runesmiter on the other hand looks fairly decent, but I find the helmet to be a marmite look. On the one hand, I like the model with its pose and details, but on the other hand, I think it looks odd for some reason I can’t put my finger on.

Overall, I like these two from the painting outcome, and hopefully I might add more hero models to the collection (cus having more Auric Runesmiters would surely make for some interesting ambushing attacks 😏). 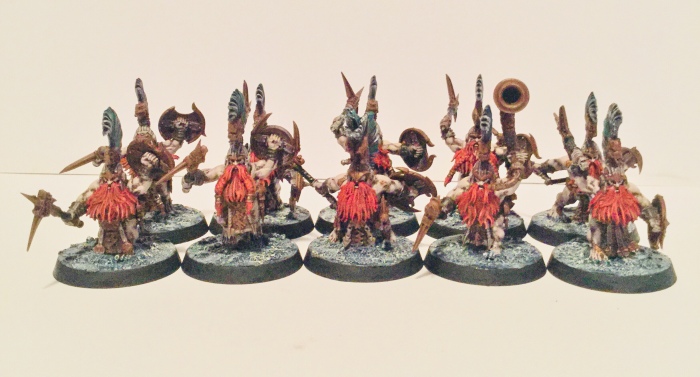 Finally, the final unit for the first wave is none other than the Vulkite Berzerkers. A vital unit for the army as a battleline unit, these guys are quite handy at rending when equipped with pickaxes (and their saving attempts being the highlight for this unit). Whilst ten is a good starting point (+1 to save roll) but I think twenty Vulkite (+2 save roll) would be a strong unit as my battleline, painting an extra ten models however would be daunting…….

You see, painting this unit in a batch was quite boring, it was a grind to get these lot done (but as I’ve mentioned earlier, painting my two Hero models did come in handy!). However, I did manage to get these guys painted eventually, although it took more time than expected to finish them.

Despite the set backs, this unit is by far my favourite battleline unit to paint for AoS, each model looks glorious with homages to the Slayers and AoS’s modern twist. These guys would also be fun to use for Skirmish, I can imagine them causing some damage to Nagash’s minions!

That’s it for my first wave of Fyreslayers for Lodge Grymthenian, I’ve had fun painting these guys all February. Whilst it will take me a few more years to fully understand AoS, I’m slowly getting more interested in the lore and background (But my thoughts on AoS will have to wait for another time).

What about a second wave you may ask? Well, that’s something I’ll commit to when I’ve finished my project on some units of the Daughters of Khaine. It’s been a very long time since I’ve seen the Dark Elves (well, their decedent factions) have been revealed, so I’m eager to learn about Morathi and her cult.

But rest assured, I will be returning to Lodge Grymthenian some time later this year! Thank you to everyone who has followed this series, I hope you have enjoyed it as much as I have.