This week I played my first game of AoS Skirmish using my Khorne Bloodbound faction, and I’ve got to say, it was really *fun! I’m really engaged to do more games with Skirmish, as I can see a lot of potential to create more focused narrative stories.

(*-Not because my Aspiring Deathbringer nearly destroyed a Branchwych during the first turn ‘Cough‘. I jest, I lost the match, but I was so close to winning!)

After the first match of Skirmish, I had a discussion with my opponent on our thoughts on the game, and wether it was worth playing into for future gaming. My thoughts on the match were fairly positive, I liked the simplicity of having smaller games that are more at stake with challenges for our factions.

It opens up more deeper narrative stories that can be explored upon, for example, disrupting trade logistic supply’s, protecting your factions leader whilst traversing dangerous roads, ambushing the enemies camp in the night or even an assassination plot to gain more reputation and power.

However, I do feel that there are areas in the Skirmish book that aren’t up to scratch, including some questionable choices for faction organisation. For example, for Nurgle Rotbringers, you can have one Gutrot Spume, one Lord of Plagues and up to five Blightkings. My criticism for this list is explained in bullet points below.

But this is only part of the issue, as one of my gaming opponents had pointed out that Skirmish might have been a rushed book due to the success of Shadow of war: Armegeddon. Now it’s debatable on wether this is true or not, but I can see how the point being raised may be closer to the truth, when you can see the limitation on what factions can use for their warbands.

Factions like the Death alligence have hardly anything sustainable to use apart from the Flesh-Eaters Court. Factions like the Soulblight and Deathmages are lacking variety of options for warband creation. For the Greenskin faction, they don’t even have a Warlord or Hero character to use to lead their faction!

Wether the points I’ve raised here are agreeable or disagreeable, I hope they will help to improve AoS Skirmish to become a great expansion supplement, like Path to Glory.

Earlier this week, I’ve found a community site called tga community (The Grand Alliance Community), which has a thread on the unofficial AoS Skirmish points for more choices including FW models. I’d recommend checking out the unofficial expanded faction lists, press/click tga community if your interested to try the lists out.

When deciding on what factions I’ll be using for Skirmish, I did some checklist work on what I can and can’t use for Skirmish (consulting the AoS Skirmish book). Luckily, most of the factions I’ve collected have a variety of options to build on, so I can now plan my army lists for future project works.

Each faction has it’s list combined with the amount of renown cost, that are within the rules guideline. Here are a couple of lists I’ve done so far. 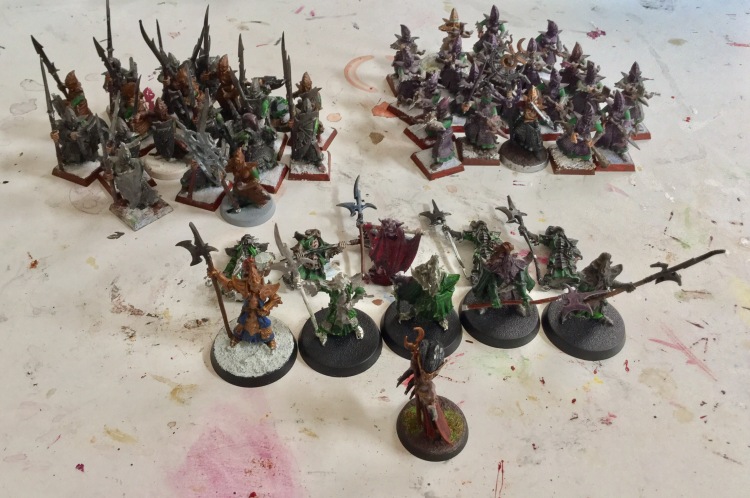 Those of you who have been following my blog for some time now will know that I rant a lot about my Dark Elves from time to time. Part of me wants to rebuild this faction back to its glory days when I used to play them, however, the other half of me isn’t motivated to work on them after the old world was destroyed during the End Times.

Skirmish might just re-ignite my motivation to get this army onto the AoS world. I’ve based the faction on a group of Dark Aelves who follow the ‘lost god’, who has influenced these Aelves to he/she’s bidding. 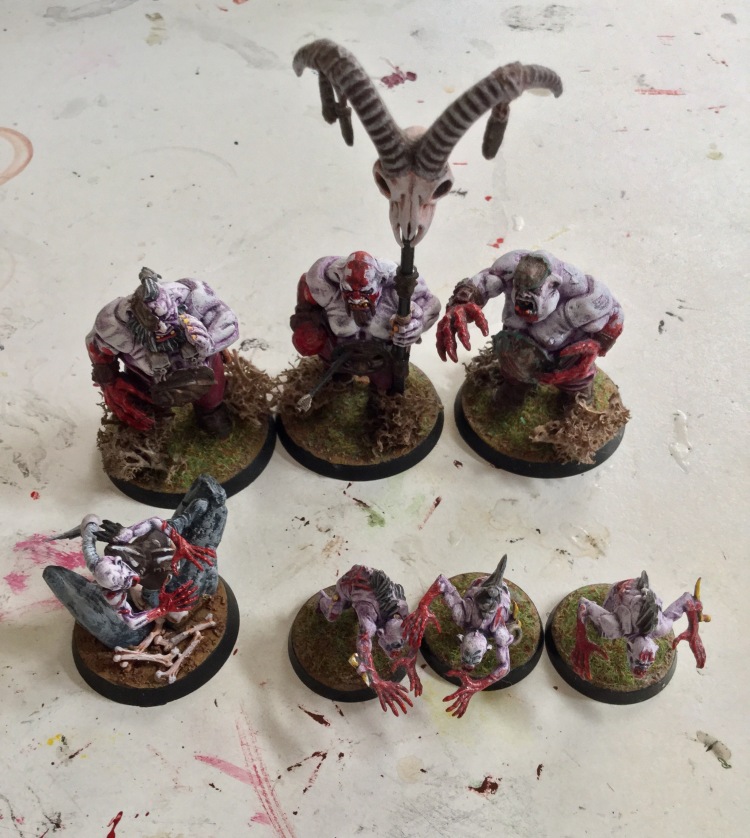 Originally intended as a 1,000/ 2,000pt army for my Death Alligence, the Liverbone Court is now built just for Skirmish and Path to Glory games. The faction is built more on the fluff rather than gaming, a decision that I’ve not regretted.

Near to completion, I’ll only need to paint 15 Crypt Ghouls, which will give me enough minions to buff with my Abhorrent Ghoul Kings magic and artefacts.

My Nurgle warband is a mixture of mortals, some being disgustingly repulsive, whilst others being beyond mortal comprehension on hygiene. The Stagrot Privateers are part of the naval force that seeks to find treasure for wealth and reputation.

So far, the faction is nearly completed, having purchased a unit of Blightkings to go along with the force. Sadly, I can’t include a Rotbringers Sorcerer because they’re not included in the warband list (which is quite odd).

I’m really looking forward to playing this warband when I play my next game of Skirmish, especially now that I have a couple of tricks up my sleaves ;).
That’s all I’ve got for now for army lists for my AoS Skirmish factions. There’s a lot more to show, including Daemons of Nurgle, Stormcast Eternals, Khorne Bloodbound and much more. Sadly, I’m pressed for time as I needed to get this post done for today. But fear not, I’ll be posting more lists with narrative backgrounds next weekend.

One thought on “AoS Skirmish ”